My friend recommended Nikos Tavern to me as an alternative to the Greek restaurants in Oakleigh. He said they were just as good. My interpretation of just as good was that they are not as good, otherwise he would have said that it was better. My success rate with ‘just as good’ places has been disappointing to say the least. Instinctively I was already thinking that Nikos Tavern may not have been such a good idea, because they were not only further away from me, but I’m settling for just as good. I thought I may be getting too caught up with these 3 words so my stubborn self wanted to be pleasantly surprised!

On one weekday evening, we made the trip to Ringwood to try these guys out. Just like the start of the movie – Meet the Fockers, it was all sweet and rosy at the start. The traffic to Nikos was silky smooth, the exterior and interior gave the place a real authentic feel, and the food we saw come out were big portioned. My skepticism turned to excitement and suddenly I was really looking forward to this dinner! Unfortunately this story has no happy ending, and what followed could only be described as a disaster… 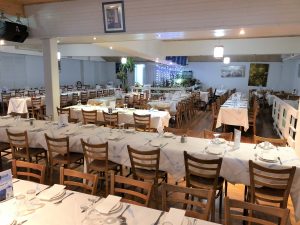 They started us off with a very generous amount of dips, and some pita bread. First thing I noticed was that the feel of the pita bread was different. They were barely lukewarm and tasted very old. Old bread has this weird texture and flavour which is very easy to pinpoint. This was not fresh at all… but what were we going to do with the dips without the bread? They go hand in hand! There were so many dips, we sucked it up and tried to power through it. The dips themselves were OK. They stimulated the taste buds initially, especially the eggplant and caviar ones, but soon they all started tasting the same. 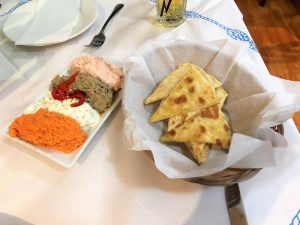 The saganaki was so heavily battered, I didn’t know whether I was eating batter or cheese. By this stage, my taste buds were all shot, and I wasn’t sure what I was looking for in this meal anymore. The chicken gyros came out, and after a quick bite… DRY. It seemed as though their turnover of meats hadn’t been good that night, and they’ve pre-cut the meat and put it in a warmer. Not only was the chicken dry but it was tasteless, and lacked seasoning. We waited a long time for the lamb, when we queried this the waitress said that the lamb was seen as the next course. This was interesting… I didn’t understand why the chicken and lamb couldn’t have come out together. The lamb suffered the same fate as the chicken, DRY. The chips that came with the salad were soggy and had zero crunch to it. They were quite possibly the worst chips I’ve ever had! Things really weren’t working out, we didn’t know what to do, so we just dropped everything and said that’s enough. 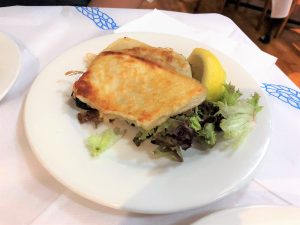 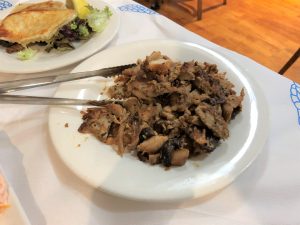 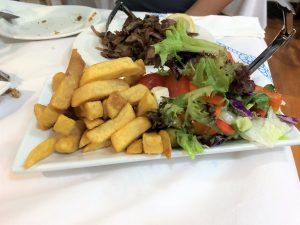 Hurts me like hell to waste food like that, but I couldn’t doggy bag it. If I’m eating meat this dry at the restaurant, the next day would be even worse. We drove home miserable, but the hardest thing was when my friend asked me what I thought of the food. I didn’t want to hurt his feelings but the truth had to be told. He seemed disappointed, but I assured him that there’s plenty of opportunities for good food in the future, and told him to not worry about it. With that said, we rode off into the sunset together…. 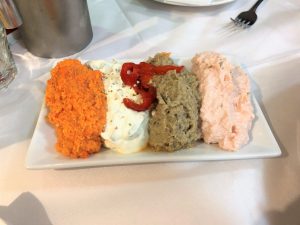