We were invited to dine at Kalamaki, a newly opened Greek street food restaurant located on High Street, Windsor. We looked at their menu beforehand, and the different styles of Greek skewers really piqued our interest! We’re huge fans of smaller menus because it allows the chef to really focus on the limited menu items, and because the turn around time is less, this can also result in fresher produce. It was only a matter of time before we would visit Kalamaki, we’re just happy it was sooner rather than later! 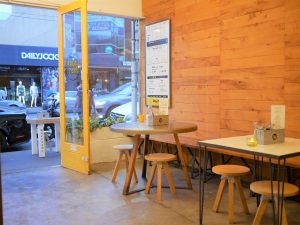 We were greeted by Dino – part owner of Kalamaki. I generally don’t mention too much on the staff when we’re invited to a restaurant, however I feel it’s important to make a mention of Dino’s persona. He had worked at a few reputable restaurants in the past, and his passion and confidence really shines through when he talks. Not to be mistaken for arrogance, I felt a strong assurance that the food was going to be great before we even started. I understand that he have to play multiple roles at Kalamaki, but I feel as though they would really benefit with him being front of house.

Having no allergies or special food requirement has it’s perks, as we left it in their hands to showcase what they had to offer. We started off with the Haloumi soldiers and a Mediterranean slaw with kala sauce. The Haloumi was not too salty at all, but the drizzle of honey does help to balance out the whole dish. All the ingredients in the Mediterranean slaw were really fresh, the red cabbage had a perfect crunch! The dressing tied everything together and it was by far the best slaw I’ve ever had. The appetising and refreshing nature of the slaw makes it a perfect compliment with the skewers. 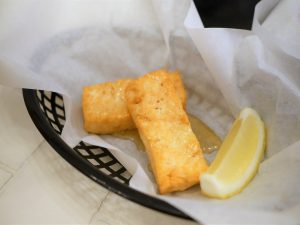 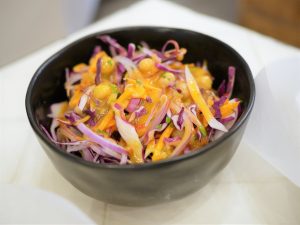 The stars of the show were the skewers. They tasted really clean and weren’t heavy at all, which contradicts how we perceive skewers to be. They didn’t overdo it with the seasoning which in turn allows the meat flavours to shine through. The skewers were cooked perfectly, still juicy and tender on the inside. It needed to be because they used chicken breast for the chicken skewers, and we all know how unforgiving chicken breasts can be! My personal favourite were the lamb skewers. 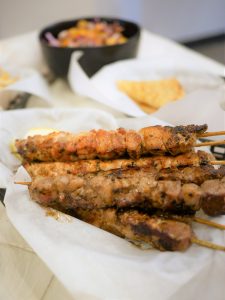 We also got a serve of lemon and feta fries. They used a herb seasoning in the fries with feta on top. These were very tasty and highly addictive! A high quality feta was used and it was scattered sparingly over the fries. It’s hard to imagine going back to plain fries after this experience. These fries are a must try, and i’m not just saying this because I have a chip addiction! 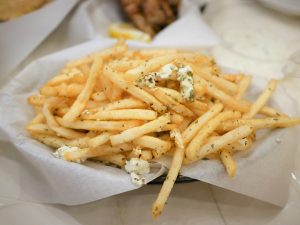 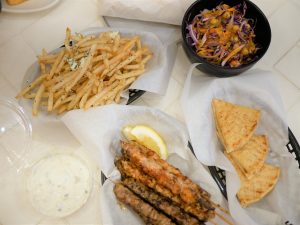 As we wrapped up, Helen and I reflected on our meal and we both came to the conclusion that all the food was flawless, and we couldn’t fault anything. Kalamaki has all the attributes to be highly successful. Great location, tasty foods, decently priced, and a part owner who is capable and passionate. Check these guys out if you haven’t, we promise you won’t be disappointed. We would wish them good luck, but something tells me they don’t really need it! 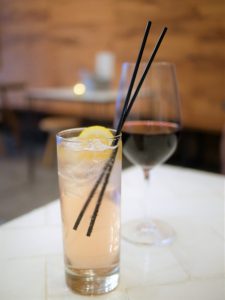 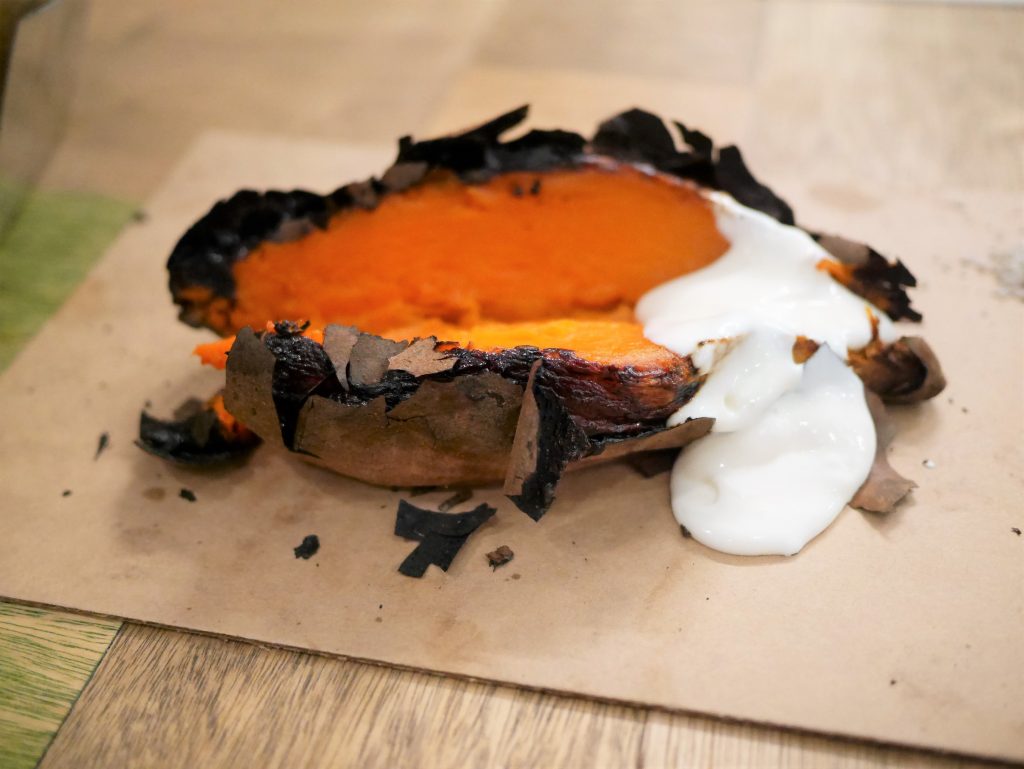 We decided to head to Miznon on a Friday night after a number of raving reviews from our fellow bloggers. And boy do we see what the fuss is all about! Situated on Hardware Lane in the Melbourne CBD, Miznon serves up Israeli, Mediterranean style street food like no other place.

Under the leadership of Eyal Shani, considered one of the leading figures in Israeli cuisine, he opened his first restaurant in his home town Jerusalem, and then his first Miznon restaurant in Tel Aviv in 2011. His reach has subsequently expanded internationally, now reaching Melbourne.

The first thing that came into my mind when we entered and throughout the night was how genuinely nice the staff were there. Not only were they super attentive but they were lovely to chat to and were very generous and accommodating. They talked us through the menu and made some recommendations because we were just so overwhelmed given everything on the menu looked amazing! We truly wanted to order everything!

We finally settled on sharing the baby octopus and chips, the Hraime – a spicy fish with tahini and chili, the sweet potato with sour cream and sea salt, and the Sac de Coque – roasted chicken, herbs, fried potatoes and aioli. Given they were well known for their pitas we also ordered the Pita with a Bone which consisted of lamb rib stew, tahini, pickles, onion and chili. The dishes were presented in a rustic style, wrapped in baking paper. It’s about the flavours and not the presentation here because after all, they were representing street style food! 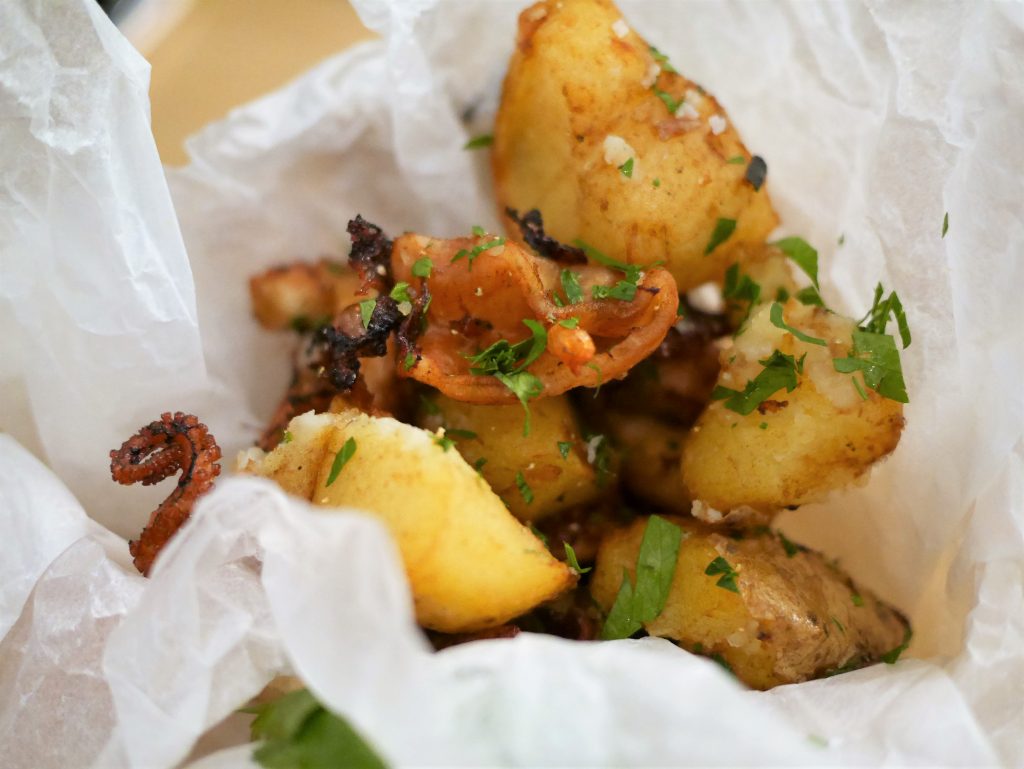 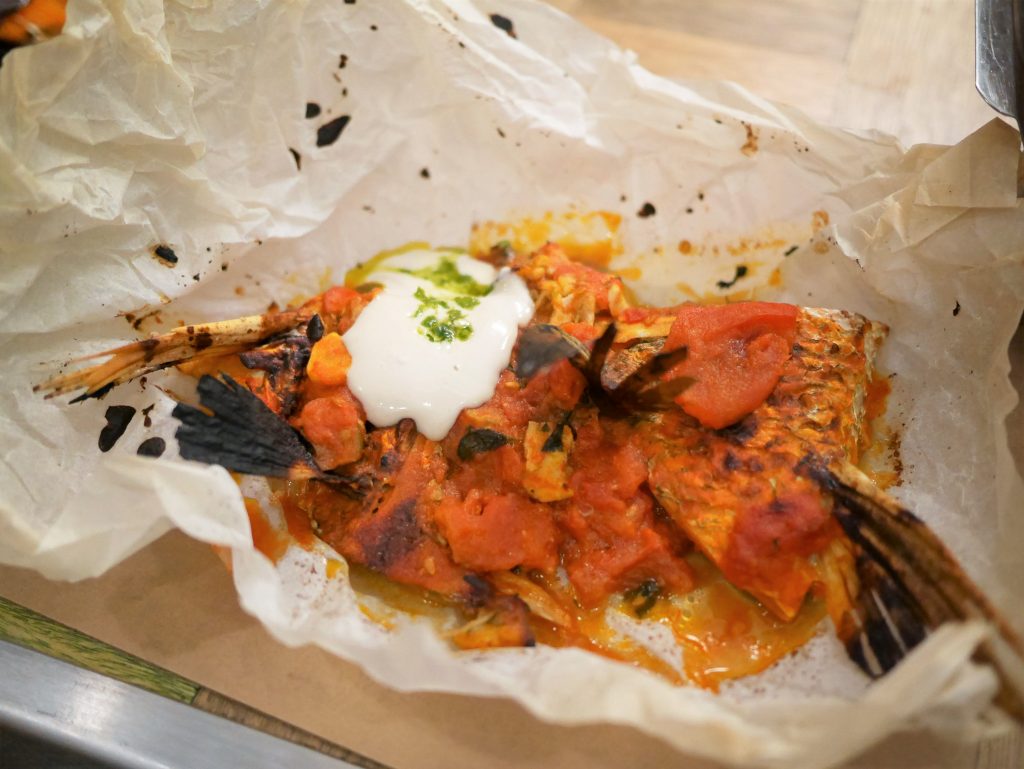 We were impressed with all the dishes. The baby octopus was lightly charred and the chips were crispy on the outside and fluffy on the inside. The spicy fish was SO good. It had the perfect kick of chili, and the fish was so soft. Now this may seem strange but the sweet potato dish was one of my favourites. It was so simple, charred on the outside and cut open with a dollop of sour cream and some sea salt. The flesh of the potato itself was soft and so sweet! How could something so simple be so full of flavour? 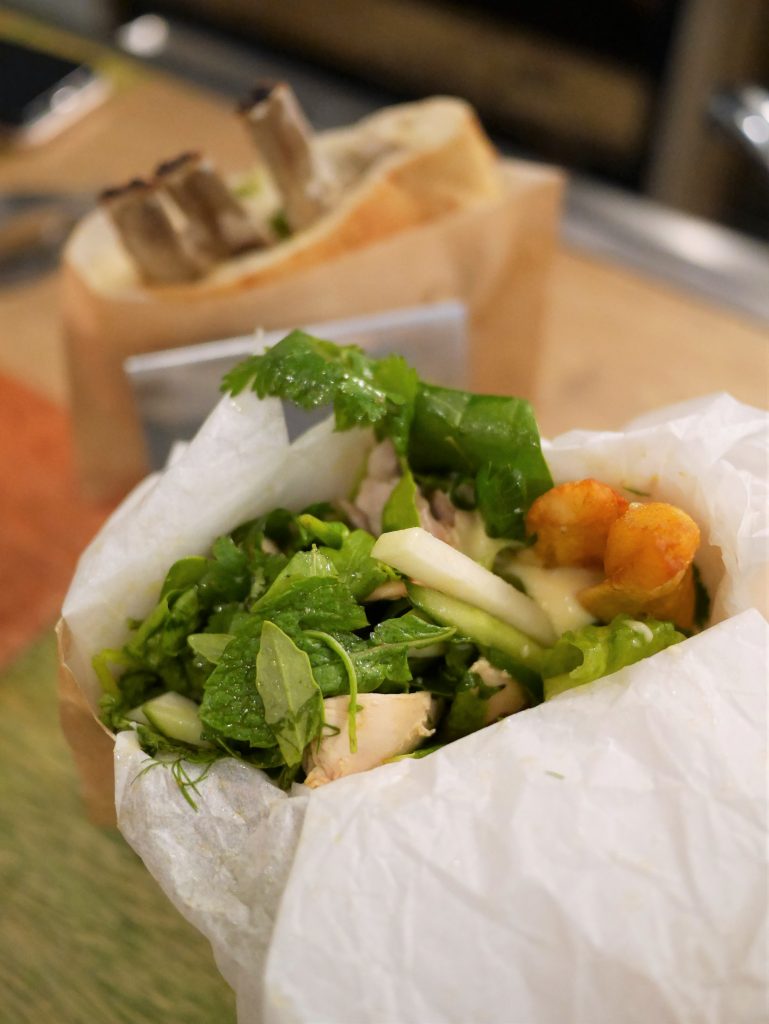 The roasted chicken was also really good. The chicken was so tender and soft, mixed in with those fresh herbs and fried potatoes, it was one appetizing dish! 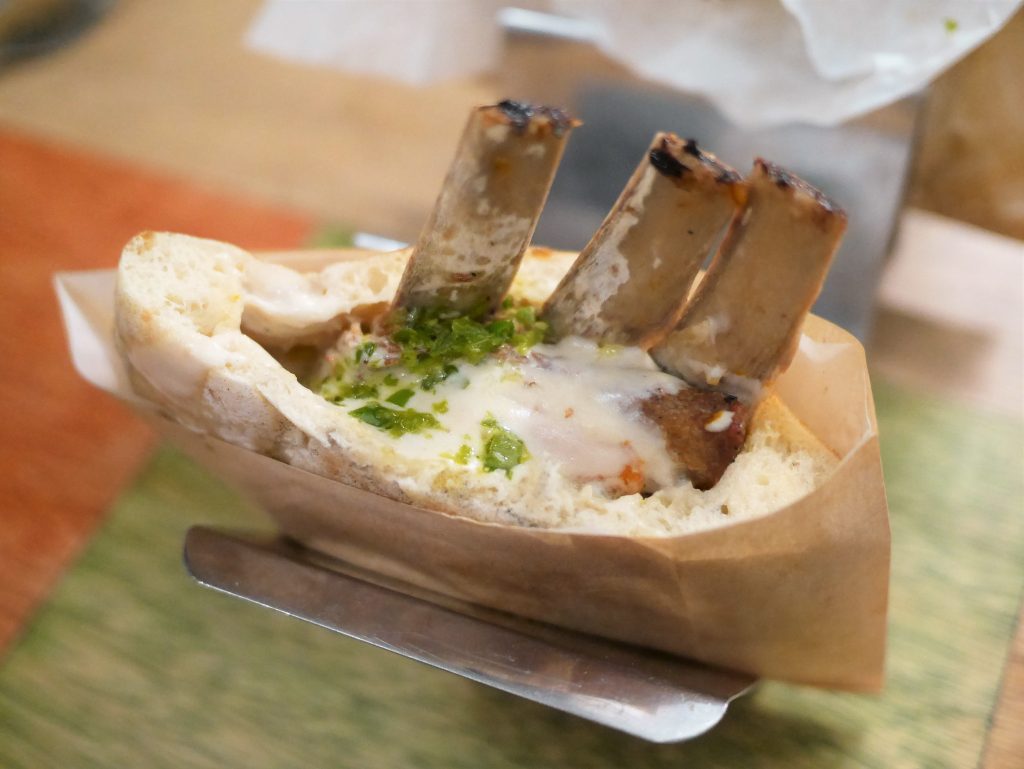 Finally the Pita with a Bone was amazing! It came out with the lamb ribs sticking out which we easily pulled out because the meat was so soft. With the tahini, pickles and onions, the flavours were spot on. We literally scoffed this up so quickly. 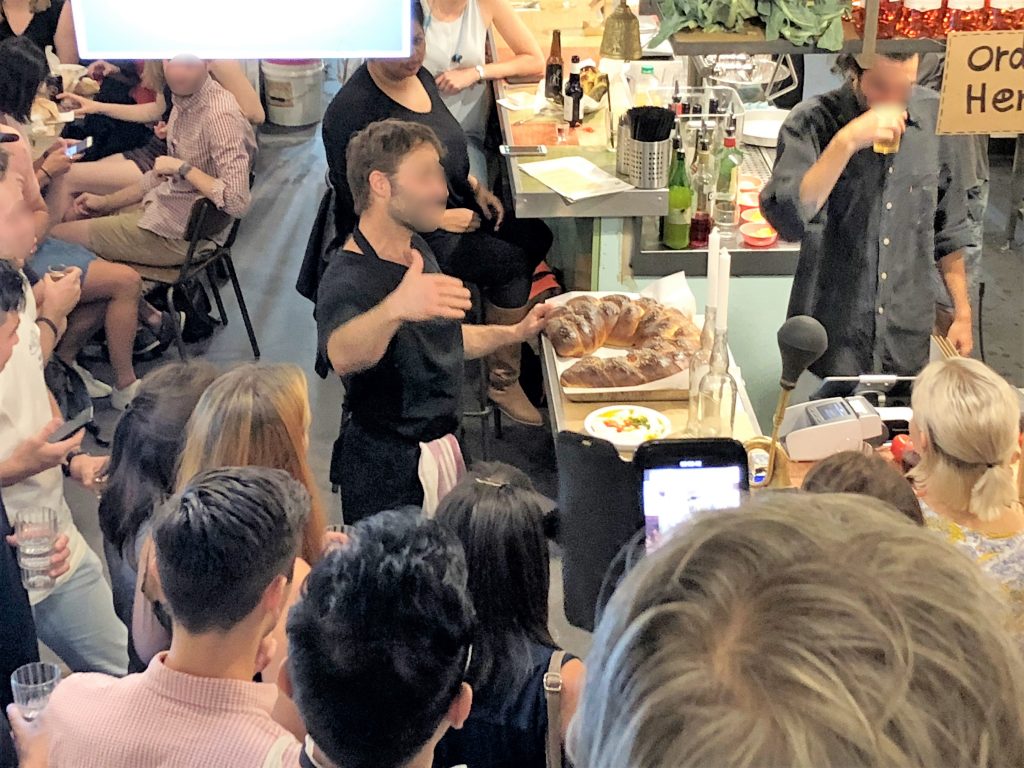 By this point the bartender told us that they were about to hold their regular Friday night Shabbat celebrations and offered us free shots of whatever we wanted to take along to the ceremony. We ended up opting for Jamieson shots and took it downstairs to watch them cut up a huge loaf of freshly baked bread and cheered and downed our shots. It was so much fun and the atmosphere was amazing! We had the privilege of eating some of the bread with their amazing dips and then headed back upstairs to order dessert. 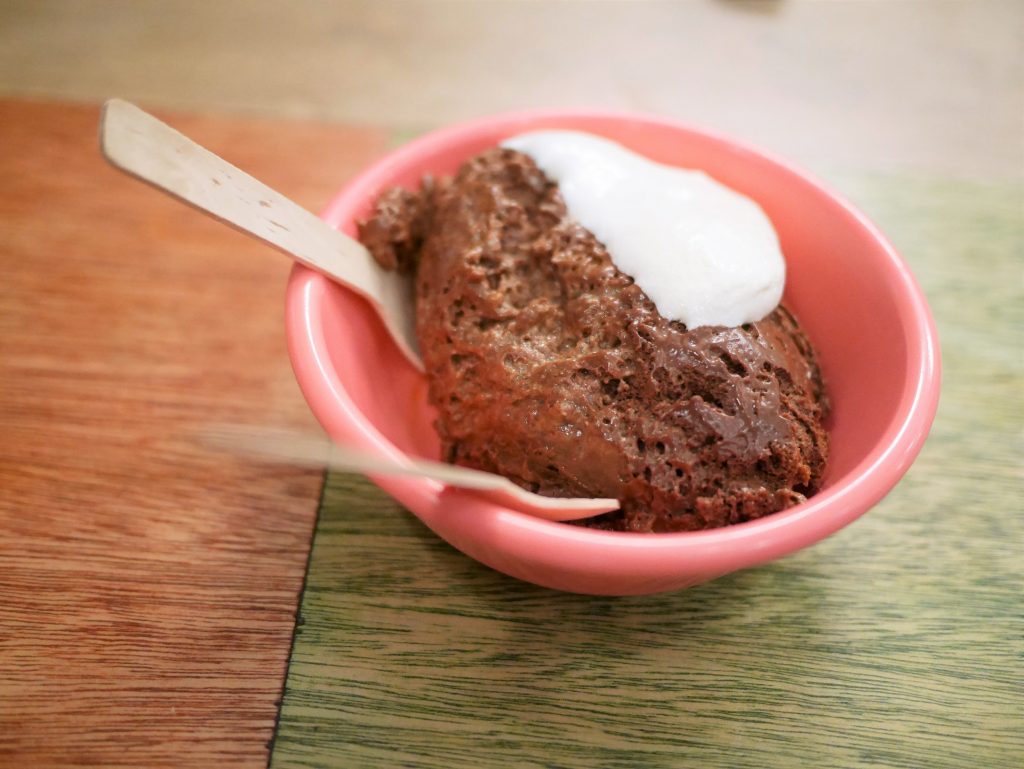 We couldn’t say no to what was listed on the menu as ‘The Best Chocolate Mousse’. Big call! And you know what? It was delicious! It was light and not too dense so we easily finished that in record time!

Now to go back to how nice the staff were, they were having issues with their EFTPOS machine and given we didn’t have cash Davin went off to withdraw some money. They were so apologetic we had to go out of our way (which we didn’t mind at all) and so appreciative that they offered us more shots on the house. We politely declined given we were driving that night but thought that was so lovely of them.

From the friendly staff, to the food, to their inclusive celebrations, it was such an amazing experience and we couldn’t fault it. We will definitely be back and highly recommend if you’re looking for some great food at affordable prices. And definitely go on a Friday night if you also want to experience their joyous celebrations! 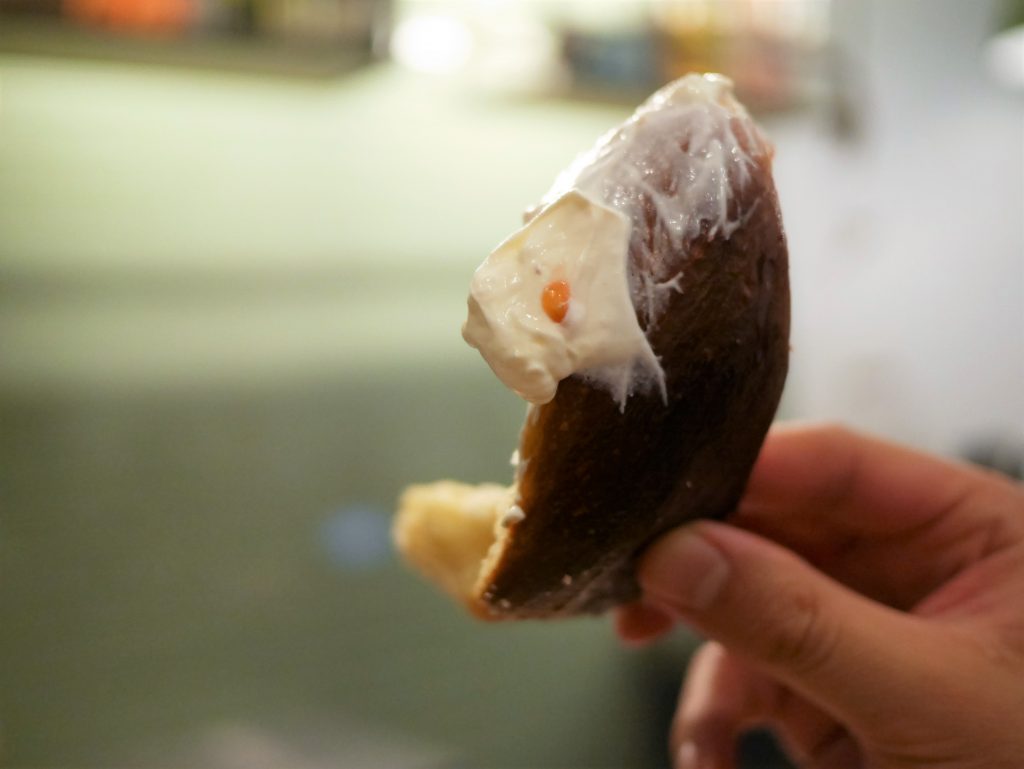