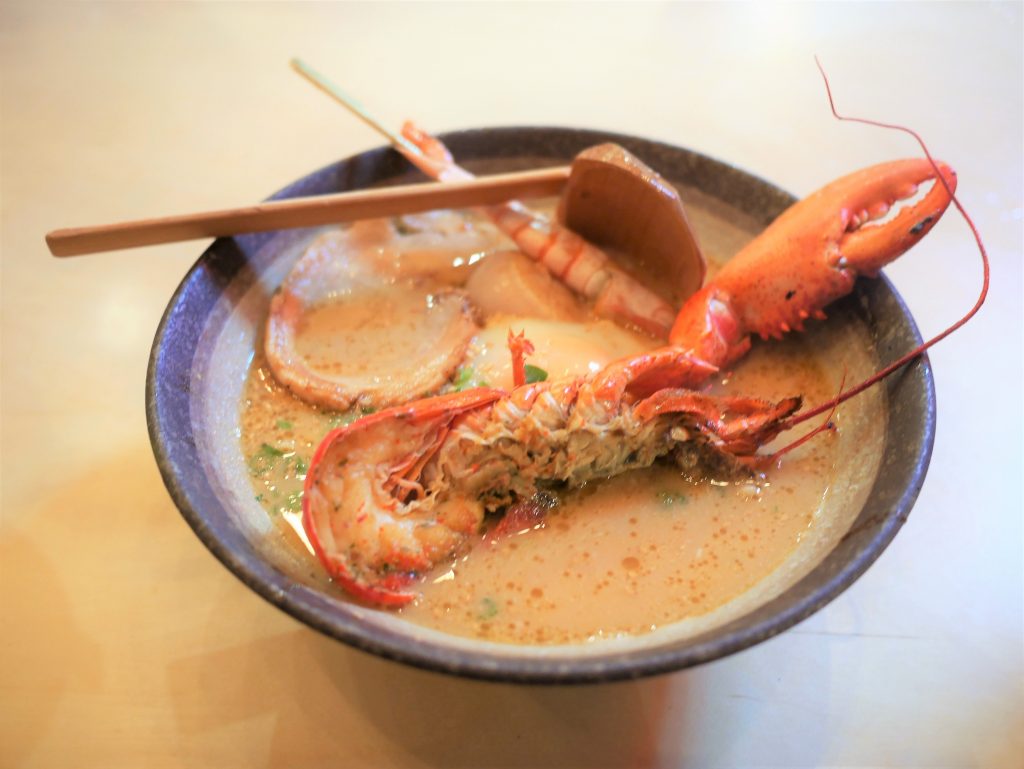 We were recently invited to dine at Unabara Lobster & Oyster Bar in Melbourne Central. We were interested to check it out given it’s not everyday that you get to have lobster ramen! So on a very cold and typical Melbourne wintry night, we headed to Melbourne Central in search of the restaurant. We found it pretty quickly and although there were tables outside within the centre, we were seated inside their restaurant which also happened to be Gyoza Gyoza. We were also provided with menus, both for Unabara and Gyoza Gyoza to order from. The restaurant itself is very casual. In fact when we sat down the tables were not that clean and had lots of water on it. 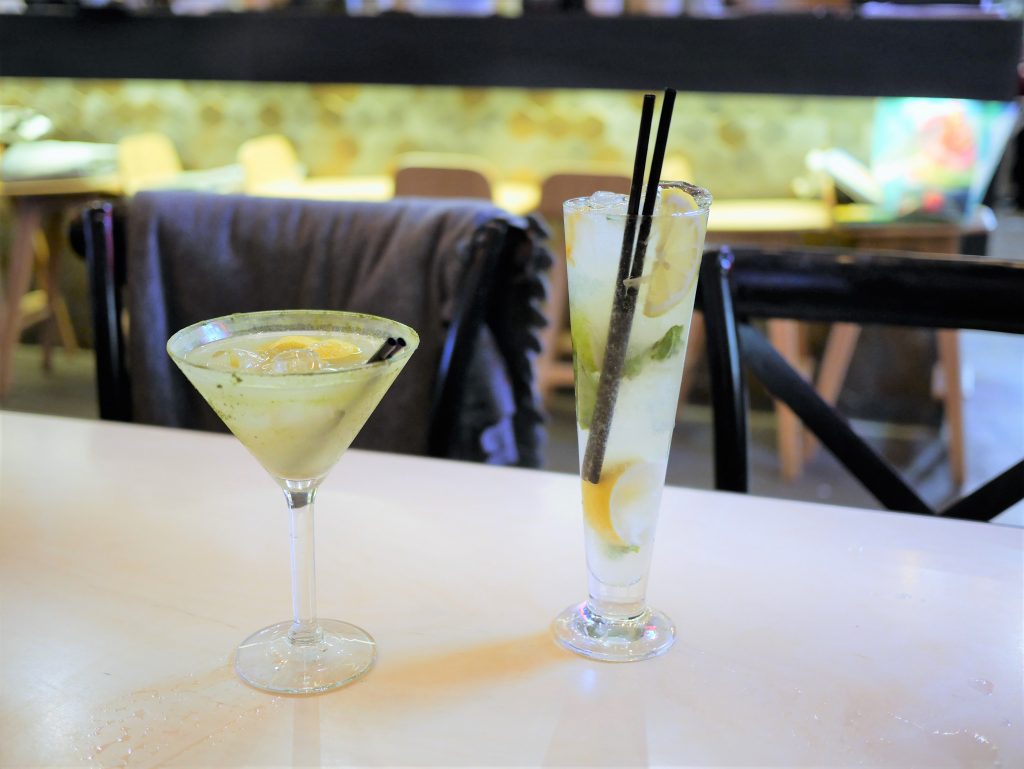 We started off with ordering a couple of cocktails. I ordered the Umeshu Margarita which had gold tequila, Japanese plum wine, Yuzu sake, cointreau and fresh lemon juice. Davin ordered the Tropical Yuzu Mojito which had Yuzushu, green tea, gin, pineapple juice, passion fruit mint, lime and tonic water. Both cocktails were presented nicely and were really refreshing. 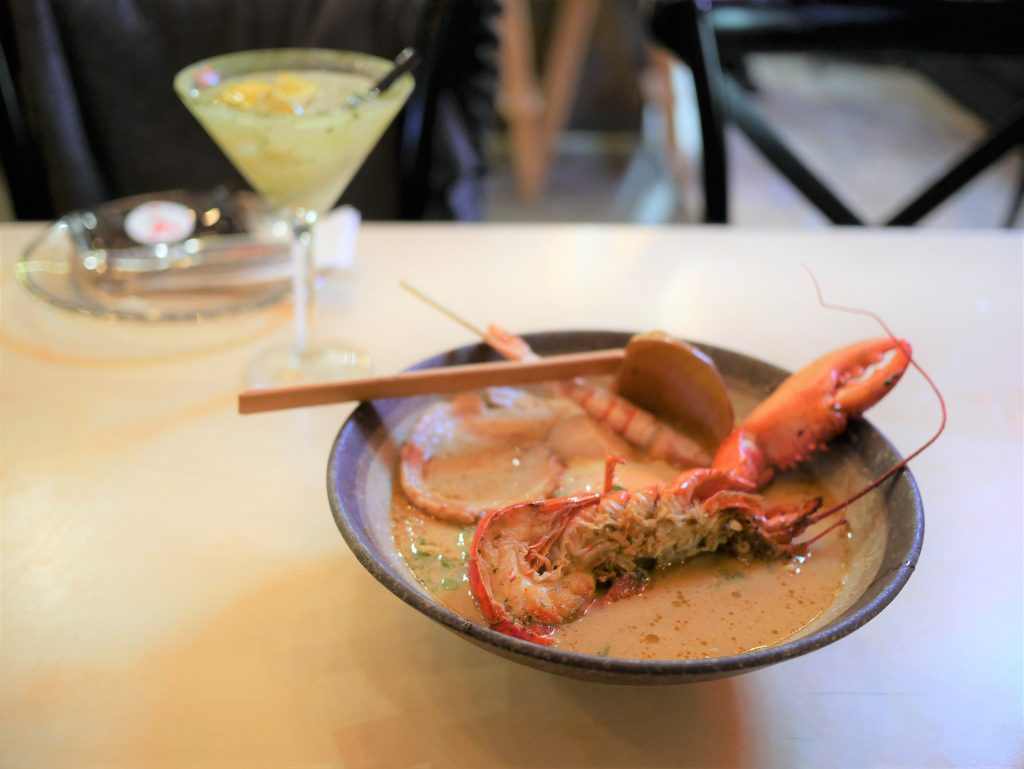 For food we of course had to order the Lobster and Seafood Sapporo Miso Ramen. There was an option to order half lobster (200 – 250g) or half large lobster (500 – 600g). We asked for the half large lobster however they advised us that they were already sold out for the night so we opted for the smaller half lobster. The dish also included a grilled scallop, tiger prawn, chashu (Japanese style braised pork belly), and a 63 degree poached egg. The broth was really flavoured and you could taste the lobster and seafood flavours in it. The ramen noodles were nice and chewy. The lobster meat itself tasted a bit overcooked and rubbery. The tiger prawn and the chashu was also overcooked, however the scallop was nice. The 63 degree egg was poached perfectly. 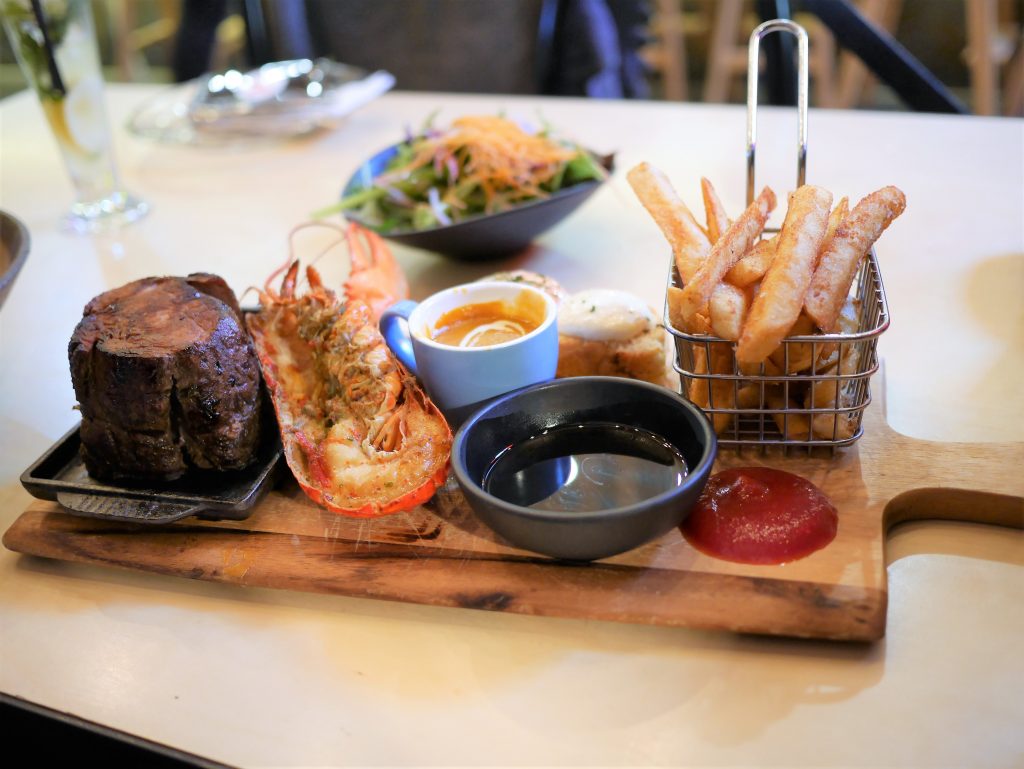 We also ordered the grilled half lobster with Angus beef tenderloin which also came with a 63 degree poached egg, toasted buttered New England split-top bun, beer battered fries with truffle mayo, wafu salad and lobster bisque. The grilled lobster in this dish was also overcooked and rubbery, and the beef tenderloin was dry and stringy. The lobster bisque was plain and lacked the strong lobster flavours and seasoning you would expect. I guess we have been spoilt with our fair share of lobster bisques in the past, particularly when we went to Europe, so we felt like this really missed the mark. I think our favourite part of the dish was the fries and the poached egg. 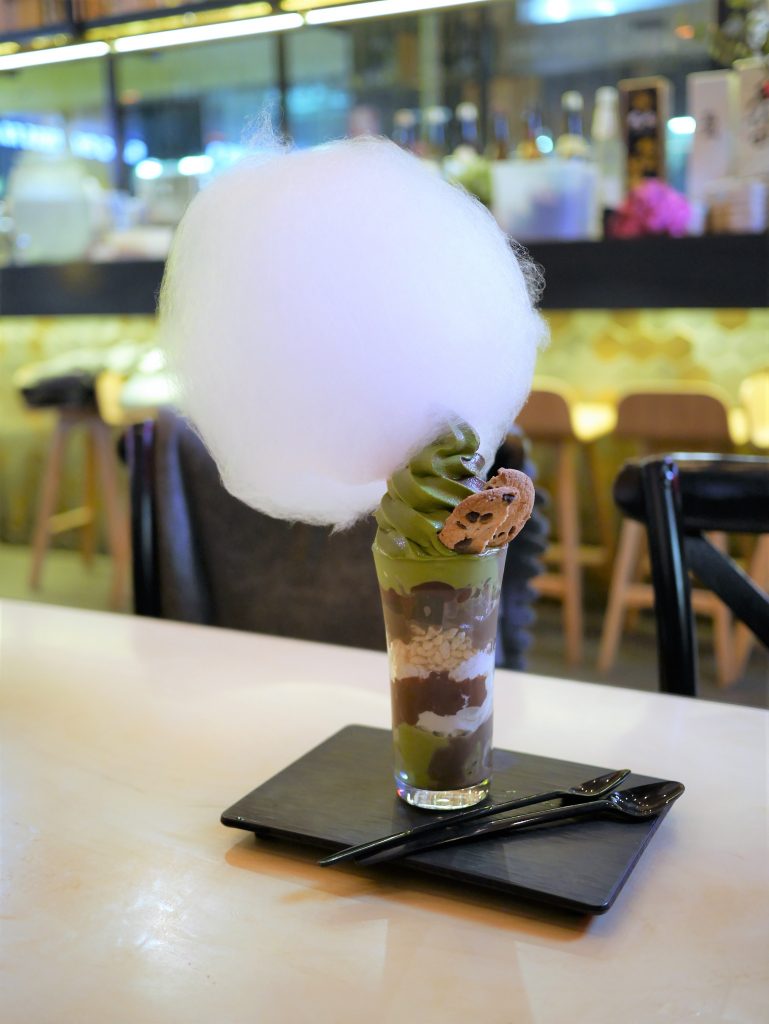 For dessert we ordered a matcha parfait with cookies and chocolate. It came with a massive and fluffy cloud of fairy floss attached to it! I haven’t had fairy floss in so long and it tasted amazing, so light and airy and just the right amount of sweetness. The parfait itself had good strong matcha and chocolate flavours to it.

Overall the lobster ramen broth was probably the highlight as that was full of flavour, along with the ramen noodles. The cocktails and dessert were also very enjoyable. Seafood is such a delicate thing to cook so I think they just need to make sure it is cooked perfectly, especially if it’s going to be part of their signature dishes. 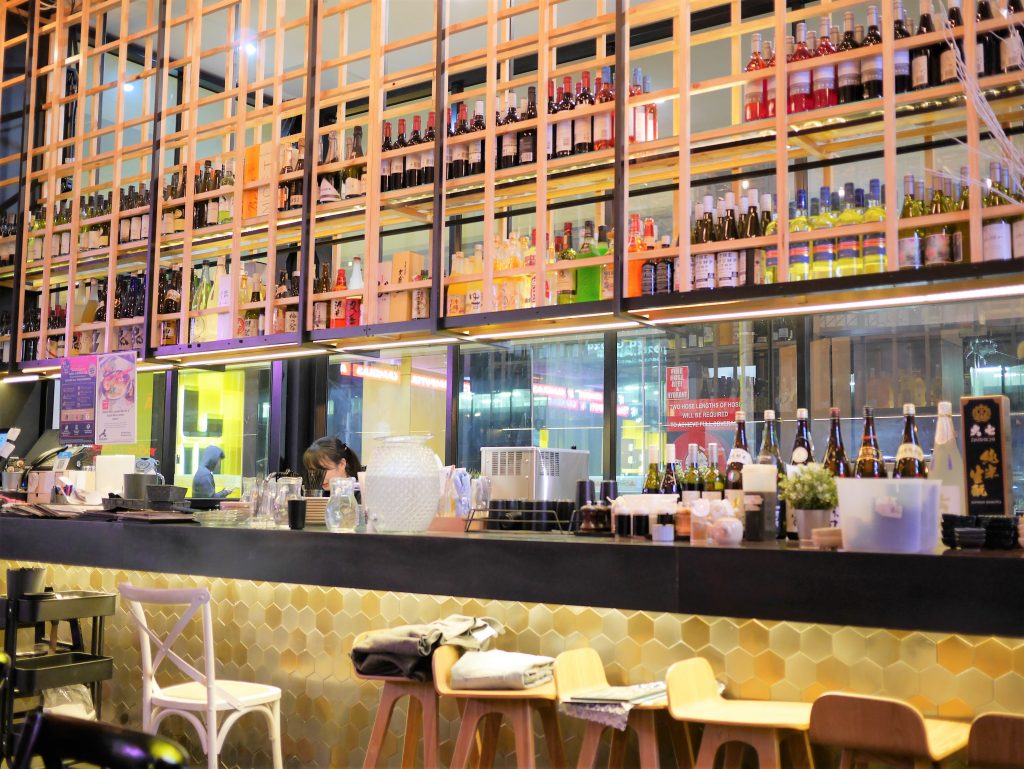 Pinchy’s is a fairly new addition to the growing family of food stalls at HWKR. There was one menu item in particular which caught our eyes – the ‘Maine to Melbourne’ lobster roll! Besides the fact that I have trust issues with anyone who’s able to turn down a lobster roll, the word ‘Maine’ means a lot to us. Firstly, as we had discovered from our US trip, Maine lobsters has some of the sweetest and tastiest meat, I prefer it over our local crayfish. Secondly, our cat Sky may be a Maine Coon! There’s a bit of confusion here because he was only listed as a domestic tabby, but everyone that has seen him is certain that he’s a Maine Coon. We’ve compared him to heaps of Maine Coon youtube videos and the resemblance is uncanny. Well anyway, that’s enough cat talk for the day, it’s time for some food talk! 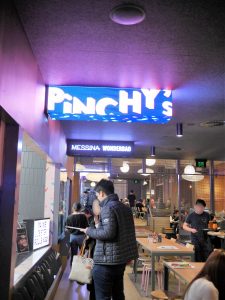 The lobster roll was served on a distressed chopping board – very hipster indeed. It’s accompanied by some cucumber, chips and ornamental lettuce. I’m a self confessed chip addict, and naturally went for the chips first. I usually have to finish all the chips before I move onto other foods. In this particular instance, I was not able to do this because the chips were SALTY! Someone had got a bit overly excited with the salt in the kitchen… I was forced to hit each chip on the side of the bowl to get the excess salt off. I learnt this move off a friend who was health conscious yet loved KFC. She would knock the salt off the chips and dab the chicken with tissue to remove the oil. It’s was the weirdest sight ever! I was not proud of my chip move, but I considered it a necessity for this particular instance.

The lobster in the lobster roll was undoubtedly fresh and had the sweetness which I was looking for. I really enjoyed the lobster itself, but felt as though the whole lobster roll itself could have been better. I had no objections with the bread itself. Apart from the size of the roll being undersized, it was the flavouring of the lobster which was a let down. From my first couple of bites, I could only taste butter and not much else. I was used to the mayonnaise lightly coating the lobster pieces, rounded off by the chives in the background. As it turns out, all the mayonnaise was piled on near the base of the roll! I ended up with a mouthful of mayonnaise and it was a little overwhelming. It’s an interesting strategy, and I had never had a lobster roll where the mayonnaise was dissected like this before. Frugal is probably the best word to describe the quantity. For $22, I felt as though the roll could have been bigger, as it was by far the smallest lobster roll I’ve had. 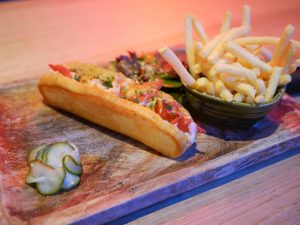 We also ordered some crab tacos. When I think of tacos, I was expecting something bigger. These tacos were puny and I was able to put the whole taco in my mouth with real estate to spare!  Bear in mind, these tacos costs $14 so that’s $7 a pop. There was nothing special about the flavour, if anything it tasted a bit bland. The avocado mousse and tomato salsa was insufficient in giving the tacos the flavour hit which it so desperately needed. 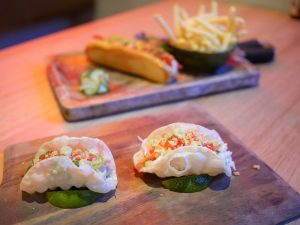 All in all, I found that the prices did not justify the quantity or the taste of the food. Could this be a case of lobster roll snobbiness? Maybe, maybe not. I can only judge and compare with the lobster rolls I’ve had in the past, and this one misses the mark. For anyone who hasn’t tried Maine lobsters, I would still encourage you to try Pinchy’s out because the lobster itself is of high quality. As a whole, it’s hard to pass on my recommendation.

P.S. We were invited by HWKR and given a $50 allowance to spend at any of their food stalls. I have tried my best to be unbiased towards the price/quantity of the food at Pinchy’s. All my opinions are based on the assumption that if we were to pay for the food out of our own pockets. 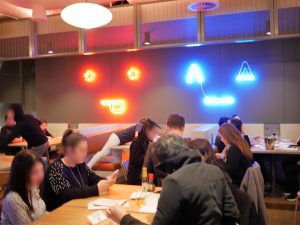 During our trip to Copenhagen we were quite keen on trying out Nordic cuisine and so of course had our eyes set on one of the best restaurants in the world, Noma.  Unfortunately there were no bookings available at Noma for the 3 nights that we were in Copenhagen so after some quick research we came across Höst who also specialise in Nordic cuisine. 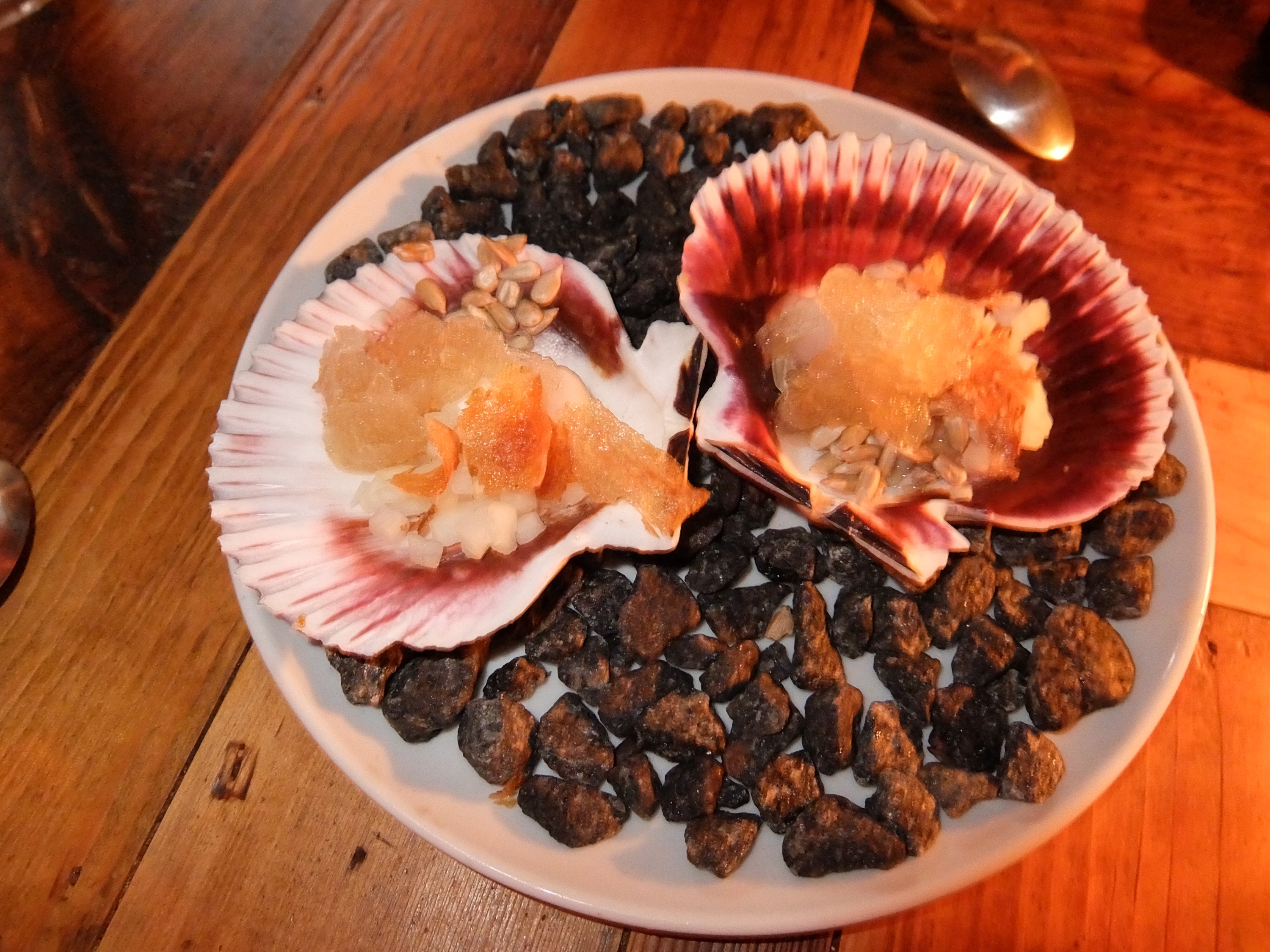 For those of you who don’t know, Nordic cuisine is based around developing traditional Scandinavian dishes using ingredients from the local regions to promote the production and consumption of natural and fresh produce. In addition, older techniques are used in developing the dishes such as smoking and salting.

Although Höst may not be listed as one of the  best restaurants in the world and has no Michelin stars to it’s name, it has built up an impressive number of positive reviews. Upon entering the restaurant you instantly receive the warm and cosy feeling from the dark wooden decor and warm dimmed lights. The menu is designed simply so that you can pick from a number of three course fixed menus which you can combine with wine pairings or you can also choose from their a la carte menu. The dishes had very special flavours which you would not normally come across however somehow worked when placed together.

As Denmark is quite expensive in general, it is also very well priced compared to other restaurants in Copenhagen with the Höst Signature Menu of 3 courses costing approximately $80 AUD and wine pairing at $60 AUD. We were also given quite a number of complimentary dishes in between showcasing their produce. Staff knew the menus well and were very switched on. Overall, it was a lovely Nordic experience and I would highly recommend! 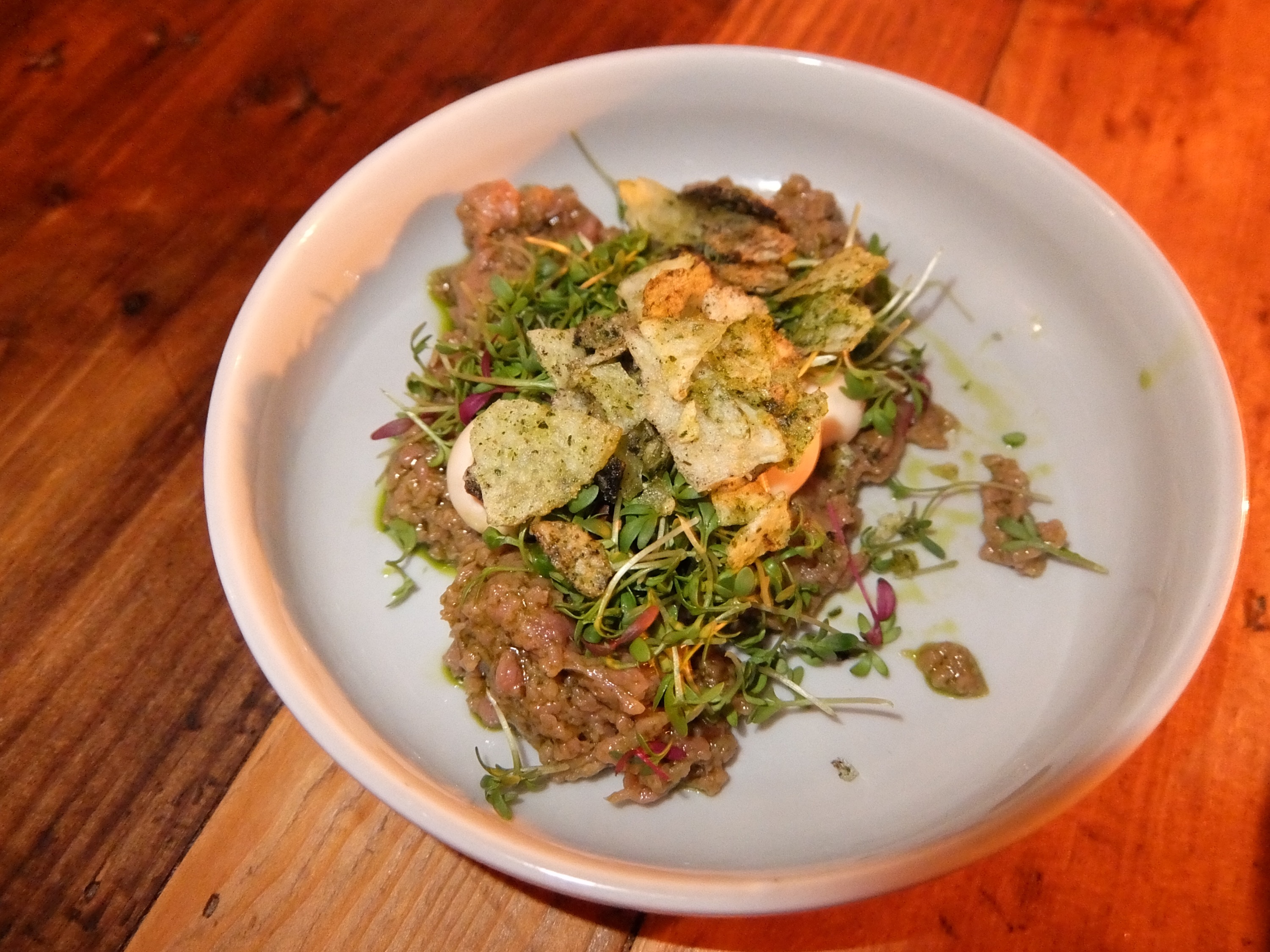 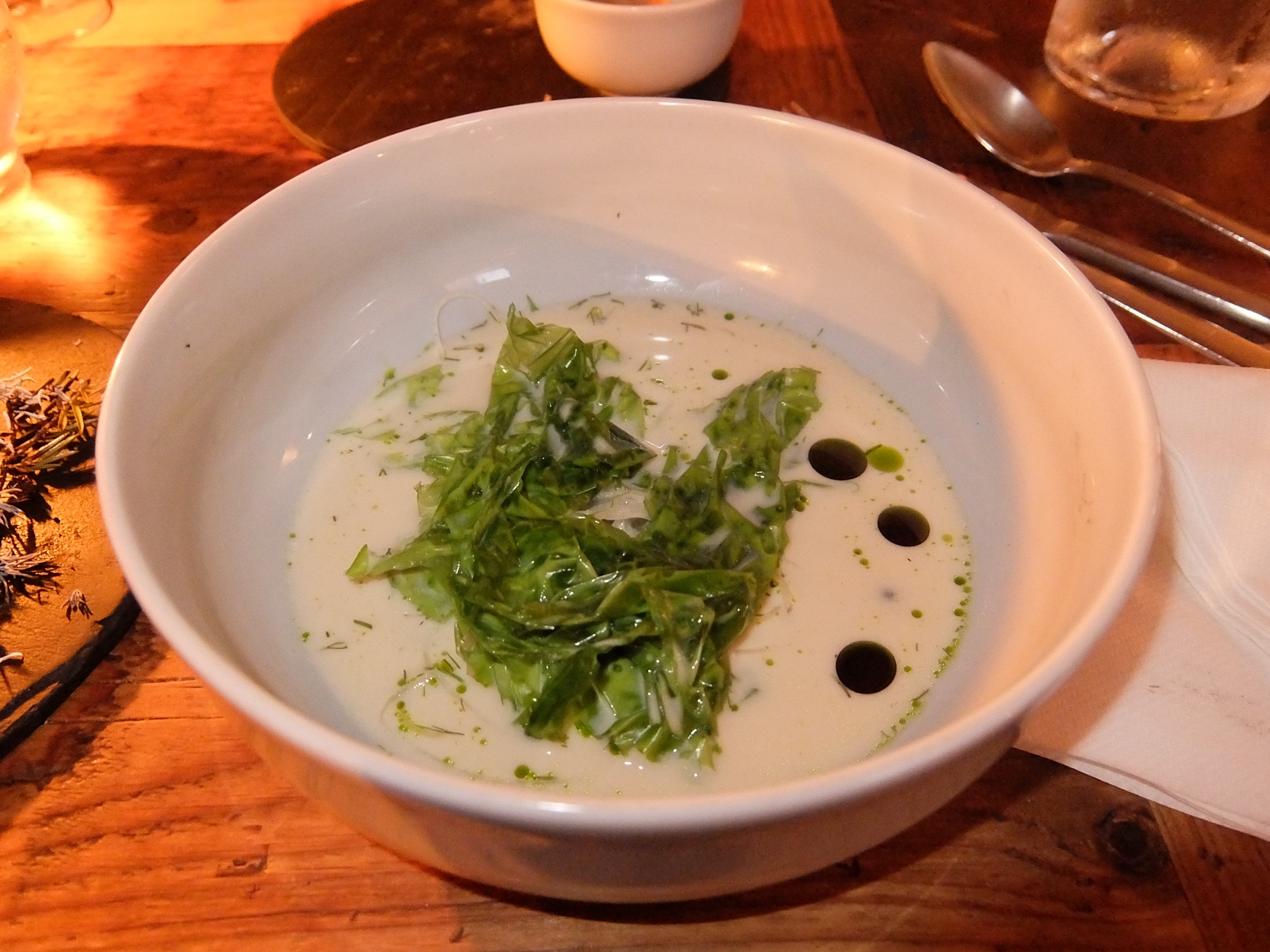 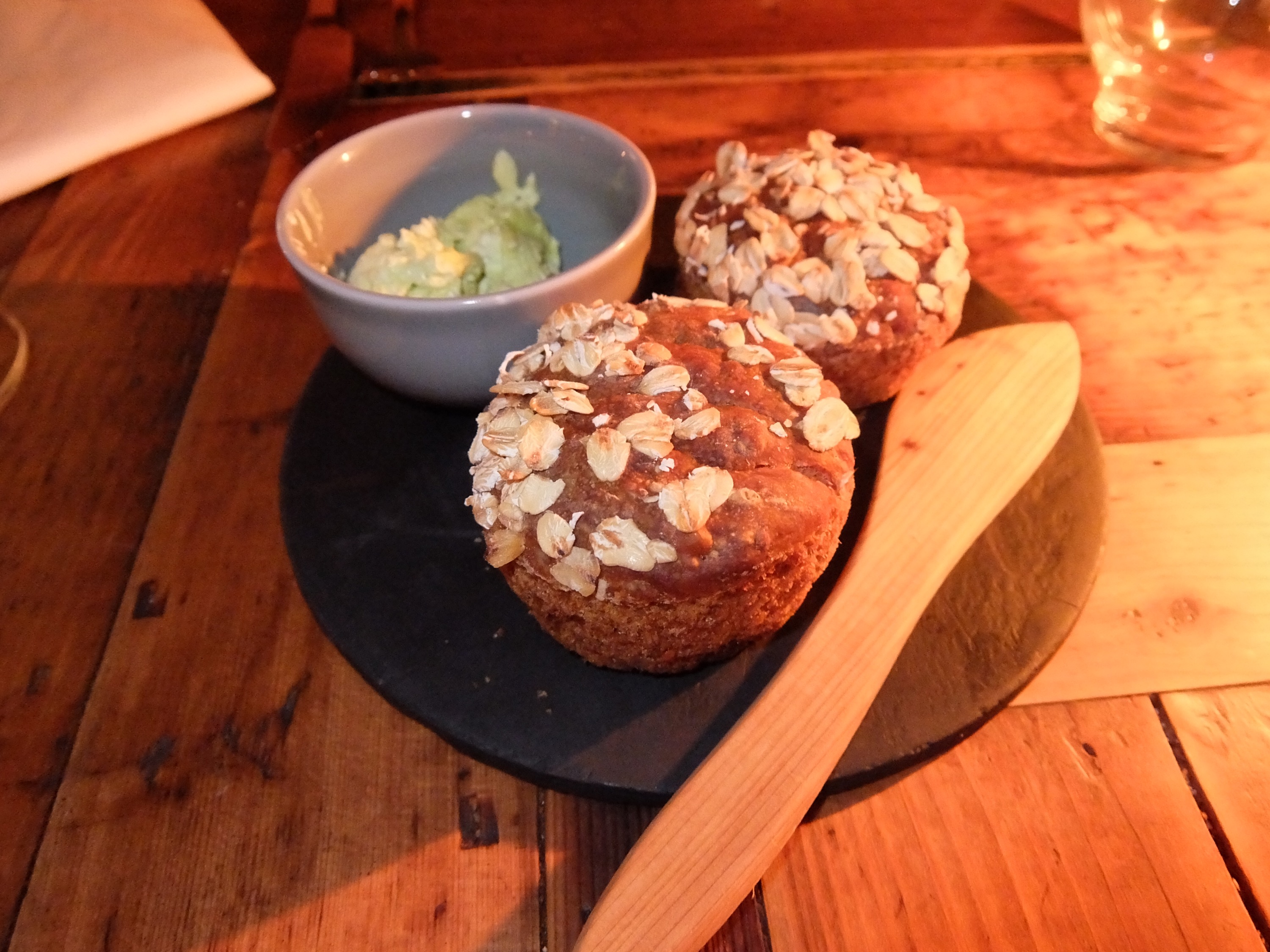