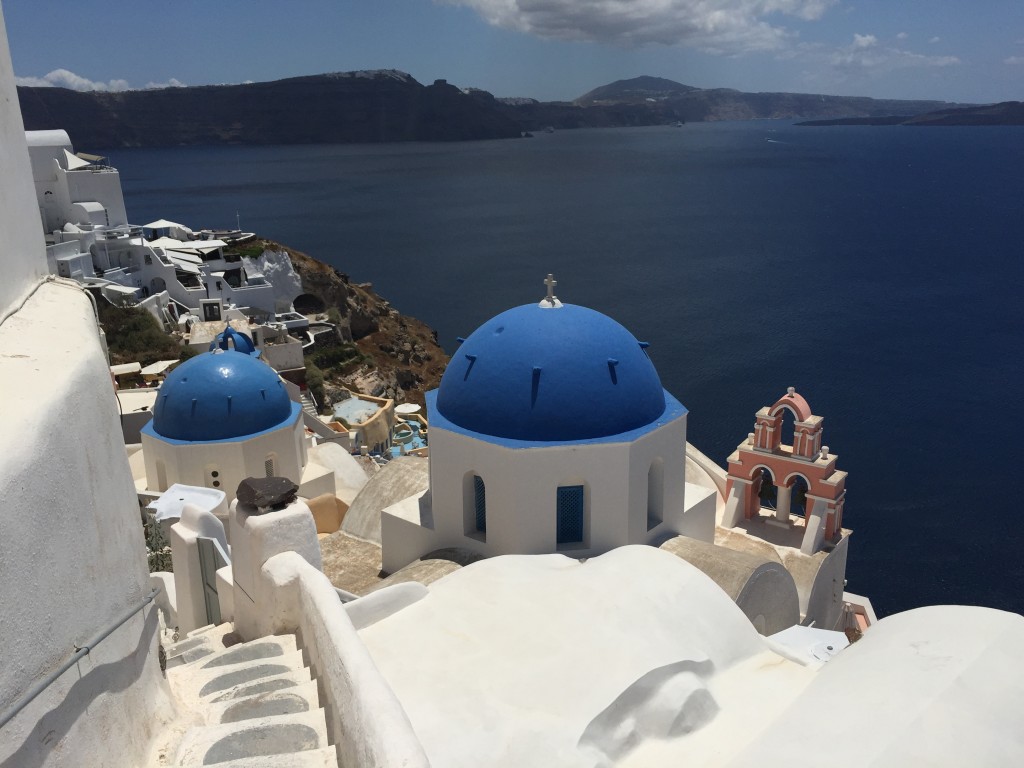 When we first landed at Santorini airport and jumped into a taxi to head towards our hotel, we were starting to wonder if we had made the right choice with visiting this famous island. Our initial observations from the airport to the hotel was that the surroundings looked barren, dry and hilly. We were worried.

But after we settled into our lovely hotel and took a walk up the hilly roads to discover the white washed buildings overlooking the bluest of waters, our worries quickly disappeared. The scenery was not like the photos we had seen.. it was way better!

Santorini is probably the most famous and popular Greek island out of all the islands in the Aegean Sea and is about an hour’s flight from Athens. Our hotel was located in Fira and only a few minutes walking distance from the water. We found that getting around to all the recommended destinations was quite easy as they had regular buses that could take you all over the island. Getting from one end of the island to the other by bus only takes about one hour so we utilised the buses regularly to explore as much as we could over the few days we had. Oia, famous for their white washed buildings and blue roofs were just like out of a postcard. 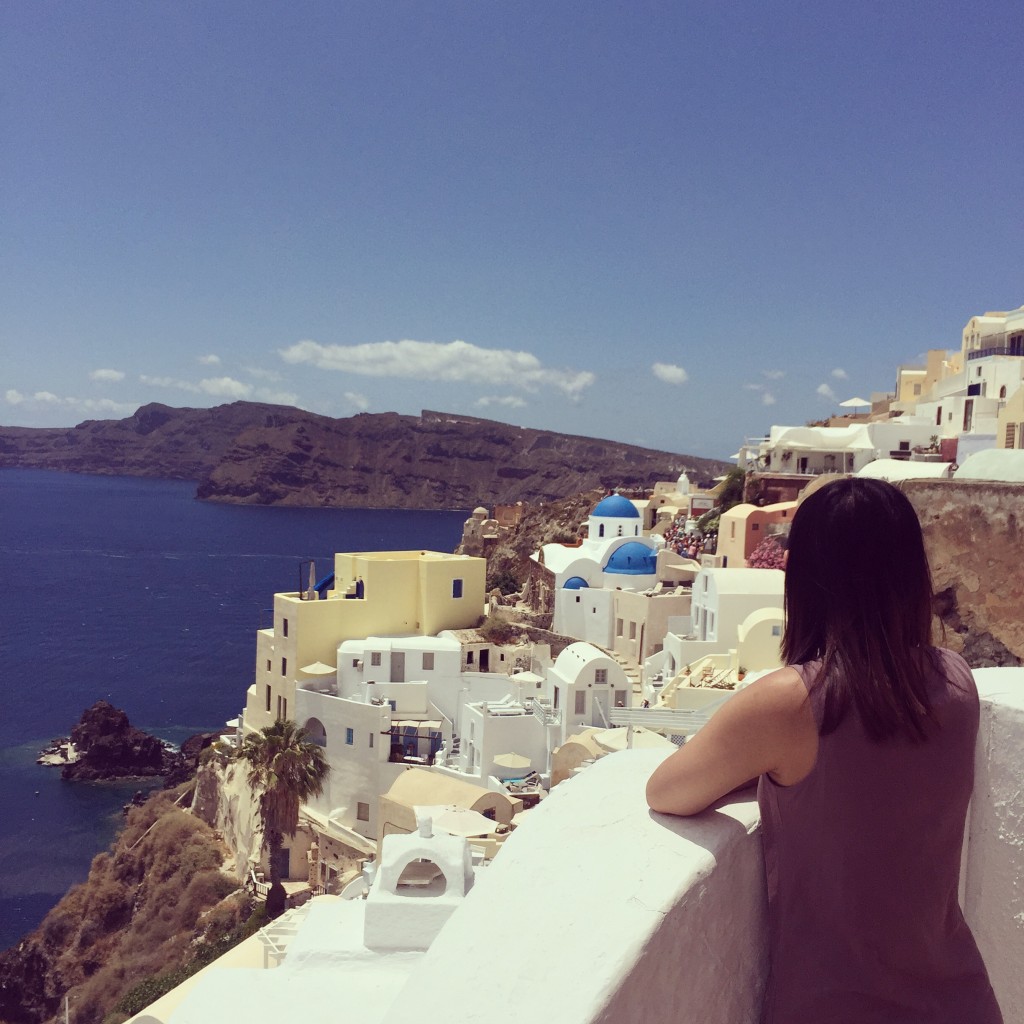 However let’s not forget to talk about the food. The seafood in Santorini was the freshest of the fresh and cooked so simply with just light flavours so that you can really taste the natural goodness of the produce. We had the most awesome seafood platter at Volcano Blue restaurant and the best fish soup we’ve had to date. In fact it was so good that we came back the next day to have more. The seafood platter had everything we could ask for and it was all simply grilled – none of that fried stuff! It came with a light lemon dipping sauce to accentuate the natural flavours and we thoroughly enjoyed it with some cocktails. 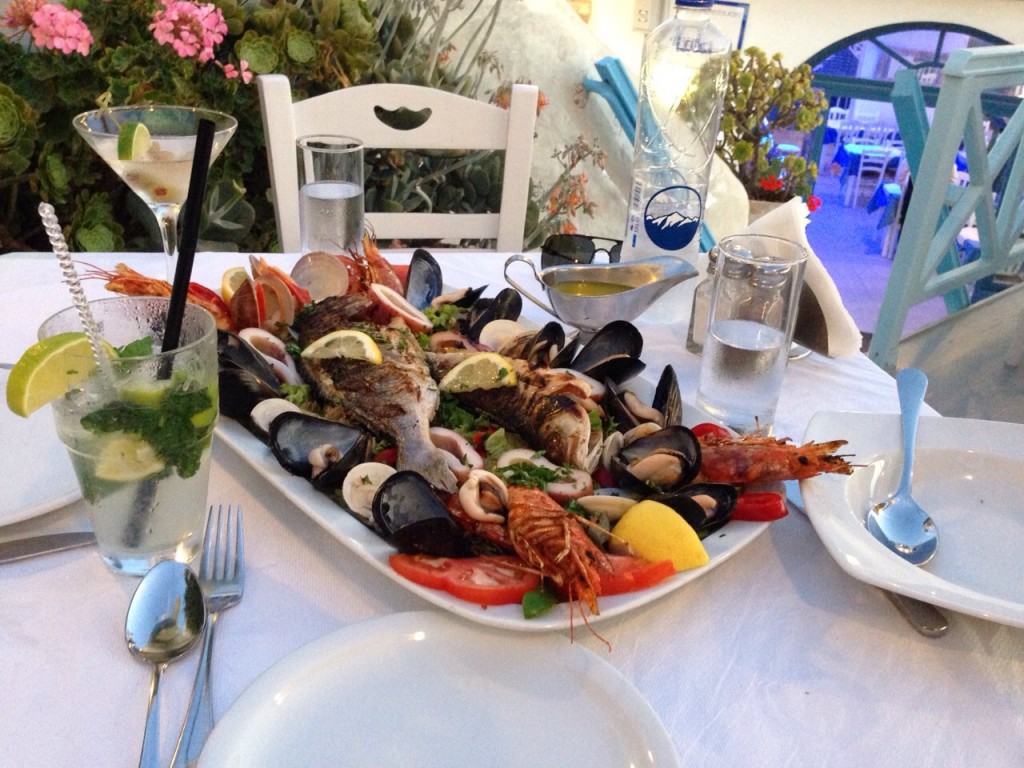 We also went to Lucky’s Souvlakis which was a small shabby looking place on the outside but was so packed with people and buzzing inside, all enjoying their famous gyros and souvlakis while sitting on stools along their long counter. There’s probably only enough room for about 10 – 15 people inside but that didn’t stop people like us from pouring in! We enjoyed our pork gyros souvlakis with some chips and a nice cold beer.

The gyros was cooked in front of you on the rotisserie and their pita bread was warmly toasted giving you that crispy texture. With the addition of lettuce, onions, tomatoes and chips loaded inside the bread, you got that extra crunch and burst of flavours from the gyros and tzatziki.

Verdict? A pretty high quality and tasty souvlaki! It was also really cheap and so is a great place for a pit stop for a quick lunch or late night dinner! I also can’t forget to mention the lovely service we received from the friendly and warm staff. The family who worked there looked like they were truly enjoying what they were doing. 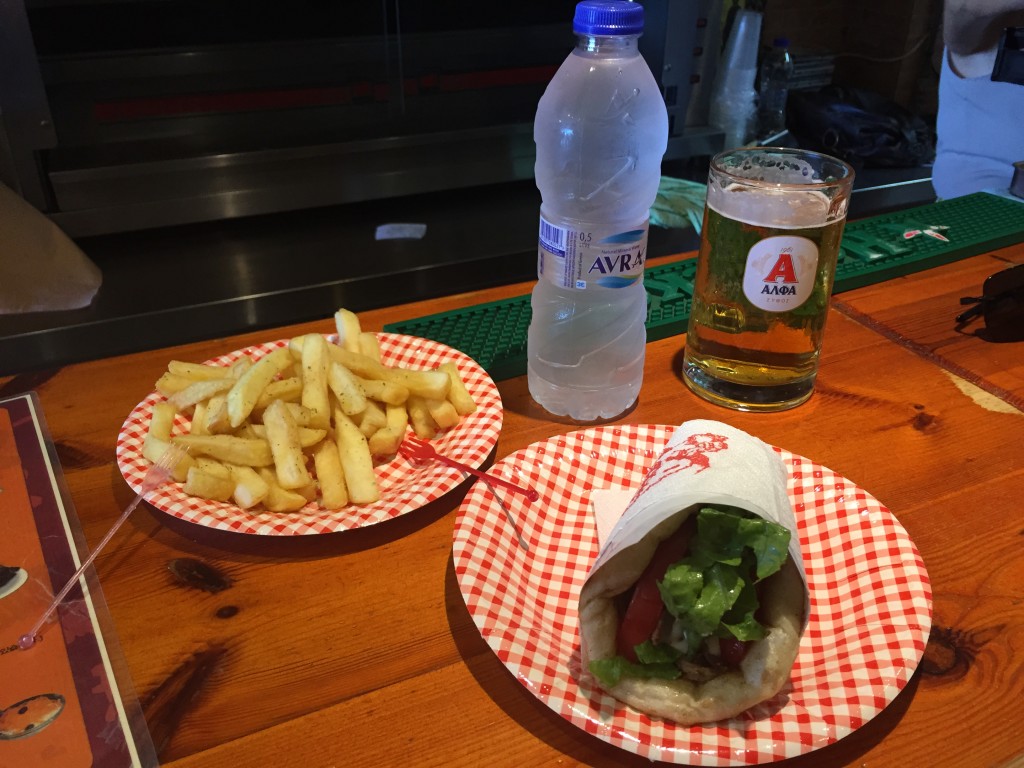 And so we visited one of their black beaches, Perissa beach, about 15 km south of Fira and easily accessible by taking one of the buses, known for its black sand and the massive Mesa Vouno rock which rises high in the distance. It had an abundance of sun lounge chairs and straw umbrellas. We lazed around with our cocktails for a good few hours and took in the tranquility and crystalline water. 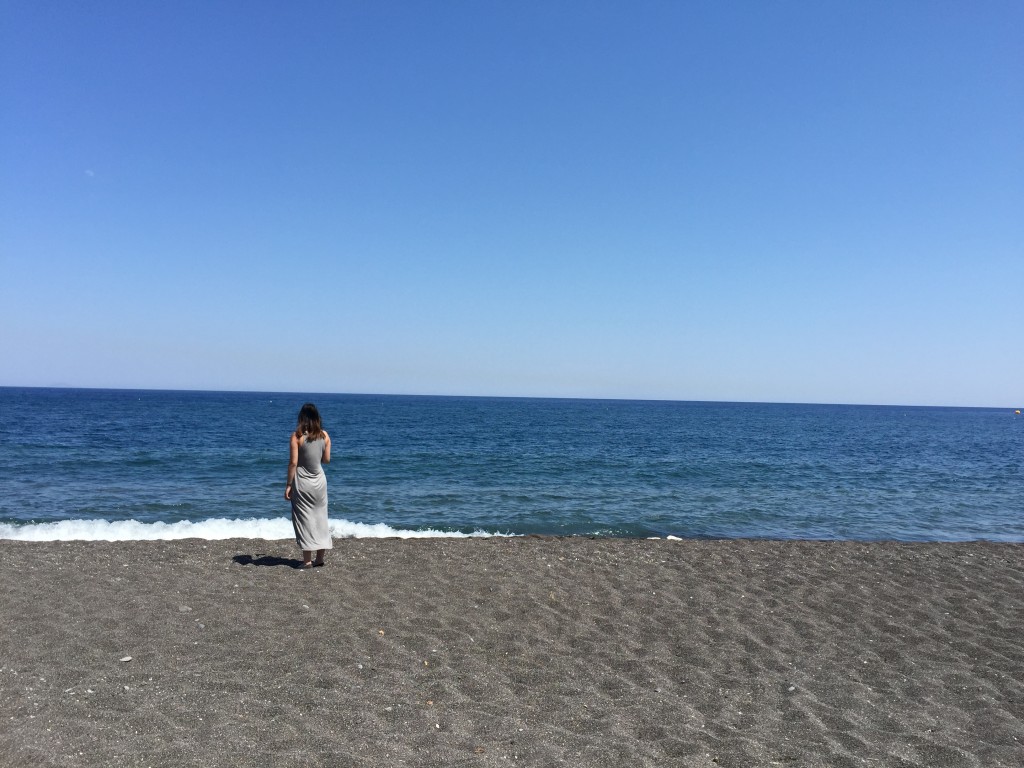 But my absolute FAVOURITE beach and place in Santorini was the Red beach. The Red beach is probably the most famous and beautiful beaches in Santorini and is only a walk away from ancient ruins site of Akrotiri. This beach also makes you work a little harder before you see its beauty because you do have to walk along a rocky and steep path, up a cliff and back down again before you reach it. For someone as clumsy as myself, I was being extra careful not to slip and topple over!

When we got to the top and looking point of the cliff we were able to admire the stunning scenery of the beach. The beautiful red landscape of the volcanic rocks enclosed around this small and intimate beach was breathtaking. It gave us the motivation to keep walking so that we could get to our destination! As we gradually made our way down to the beach there were many sun lounges and umbrellas to choose from in which you pay a small fee to rent for the day.  We sunscreened up, dropped our belongings and jumped into the beautiful blue waters. 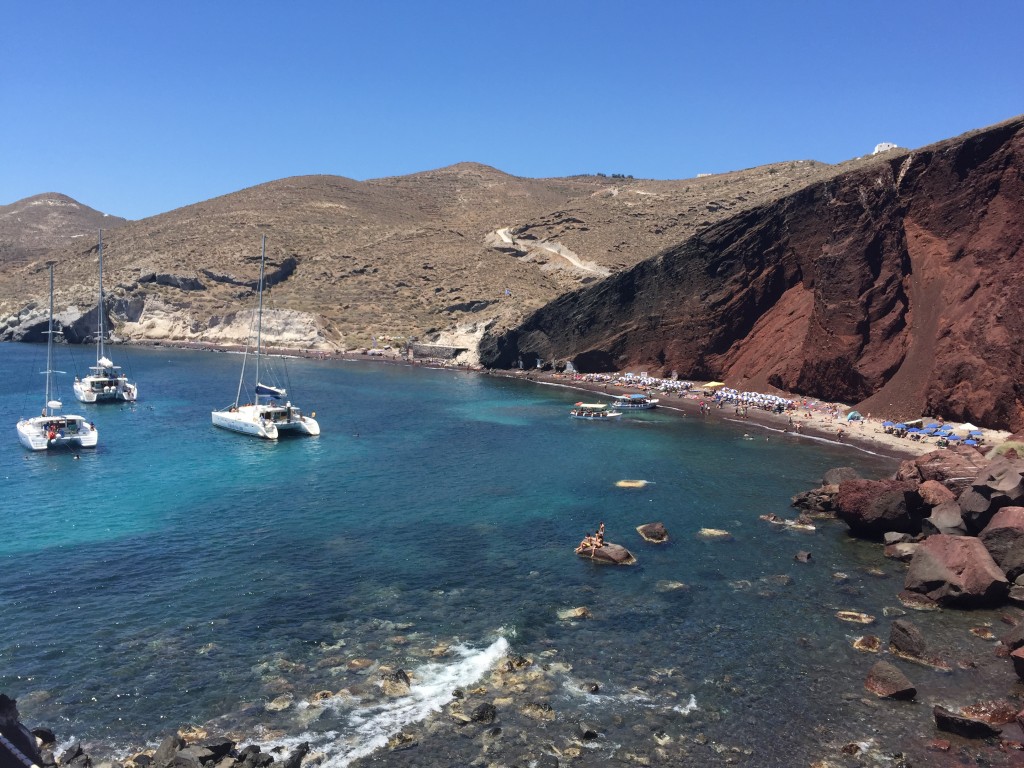 Overall, I have to say that Santorini was probably one of my favourite places on this Europe trip and I would definitely revisit. Not only was the food amazing and the scenery was stunning, the people there were so lovely and warm. It was also one of those places where we didn’t have to rush around in a bustling city and we were about to take our time, relax and just soak up the atmosphere. The weather was definitely beyond warm, it was hot! But even more of an excuse to take a dip in their crystal blue waters. 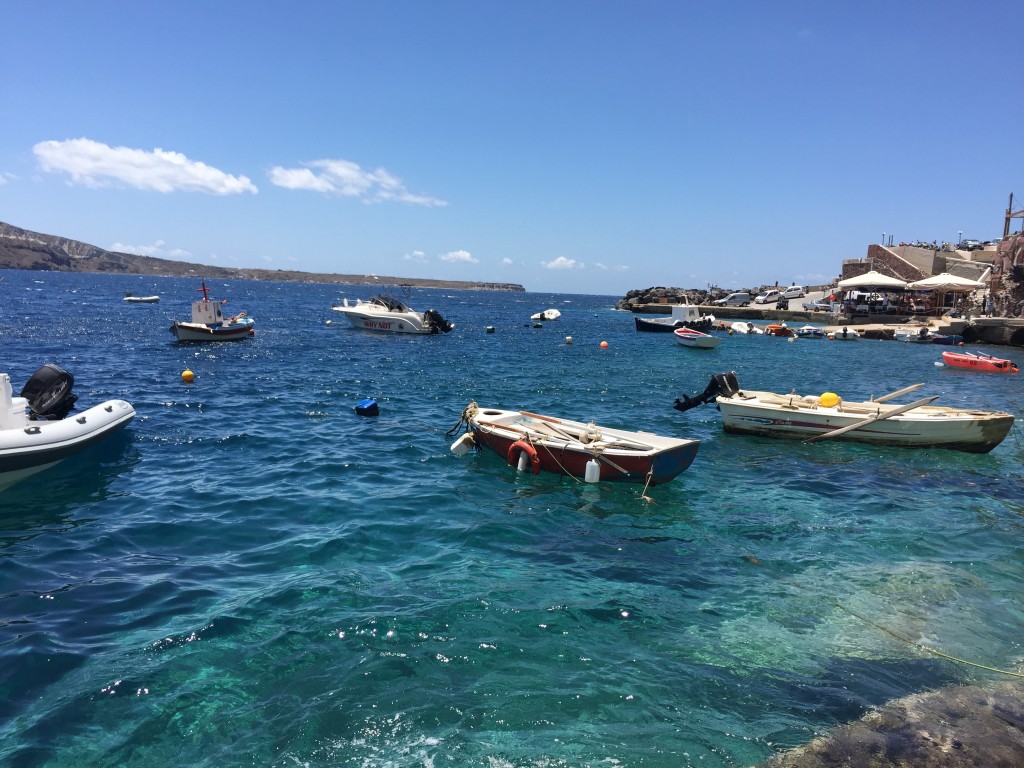