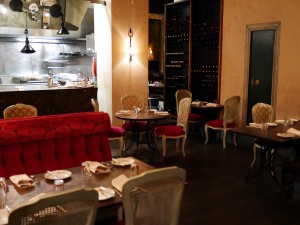 There is one thing which Bistro Vue set out to do, and that is to be as French as they could possibly be. As a matter of fact, they tried so hard that their dining room actually looks more French than all the restaurants we went to in France! Everything from the chairs, tables, cabinets, plates and even the walls are French influenced.

We made a booking on the day and was greeted warmly when we arrived. They asked us to have a drink first at Bar Vue which is attached to Bistro Vue. It was full of Friday after work drinkers but it wasn’t too noisy, we could still have a conversation. I ordered a Bourbon Macchiato and Helen got the cocktail of the day. Both cocktails were very nice however I thought the ones in the classic section were a bit pricey. Half way through our drinks we were told that our table was ready and we were escorted into the dining area. 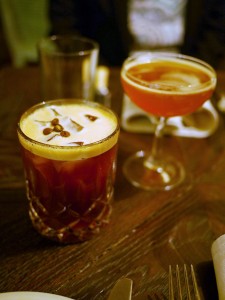 We ordered a French red and proceeded to look at the menu. Now you know a menu is really good when there’s too many good things and you can’t decide what you want! We decided against the $110pp for 6 courses because we wanted to try specific dishes from the à la carte menu. The waiter who served us was a little odd. When we started ordering he kept making a weird face. I looked at Helen as if to ask ‘what does the face mean?’ but she had no clue either. I didn’t know whether it was because we were ordering too much or too little. He was also quite pushy with the Paperbark baked snapper dish which we did end up getting. Can’t say i’m a huge fan of the service. 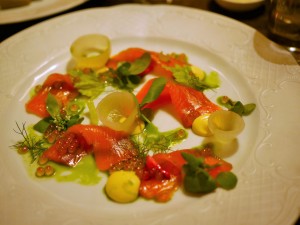 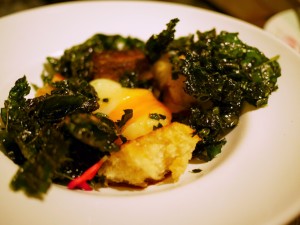 The food here was really high quality! Steak tartare was very authentic, and brought back memories of France. The garlic snails was nice but didn’t come through as much compared to the other entrees. The trout was beautifully smoked, but the highlight of the entrees and the night was the duck egg, this dish was just amazing! I never imagined duck egg and kale would go so well together. I would recommend anyone to come here just for this dish. The paperbark baked snapper provided some theatrics when it arrived on the table as they unravel the paperbark. It was a very tasty piece of fish. Worst dish of the night has got to be the kangaroo loin (serves me right for trying kangaroo at a French restaurant). It’s just that I’m still searching for that perfect roo which I had so many years ago… 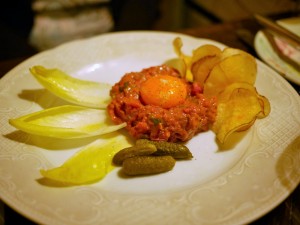 As a whole I really enjoyed my experience at Bistro Vue. The ambiance was great and they produce high quality French dishes. Apart from the service, I had an awesome experience here. I felt like the mains were on the expensive side in comparison to the entrees. The entree portions were quite generous so I’m thinking next time we would do 5 or 6 entrees instead of ordering mains. If you haven’t been here, do check Bistro Vue out, I’m sure you’ll leave with a very happy tummy! 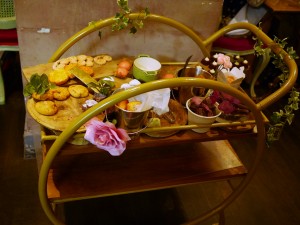